–Article published on the Salt Lake Tribune by Kathy Stephenson 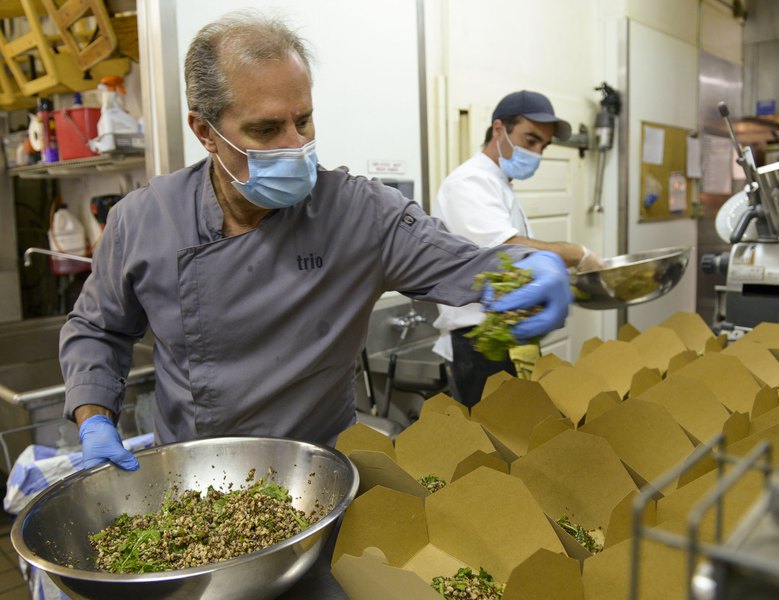 Helping Heroes — a program launched out of necessity in the early days of the coronavirus pandemic — recently donated its 1,000th meal to front-line workers in Utah.

In March, when restaurants and bars were prohibited from offering sit-down service to prevent the spread of COVID-19, Salt Lake City-based food distributor Nicholas and Co. found itself with thousands of pounds of perishable fruits, vegetables and other food items with nowhere to go, said Nicole Mouskondis, co-CEO with husband Peter of Nicholas and Co.

“We were not going to throw away product,” she said. “We just needed to get it to the right places.”

The Utah Chapter of the National Football Foundation also became a partner, helping to raise money through its “Buy One, Give One” initiative.

Besides preventing food waste, the program has kept restaurant staffers busy during the shutdown, said Cafe Trio owner Mikel Trapp. “We’ve prepared and packed between 60 and 100 meals each week.”

Nicholas and Co. used its idle fleet to deliver the meals to workers along the Wasatch Front, focusing mostly on skilled nursing homes, assisted living facilities and medical clinics.

Several donations have been made to City Creek Post Acute, 165 S. 1000 East. The 72-bed facility is one of two Utah centers caring for people still recovering from the virus and who may have other health issues such as diabetes.

Even though the state has eased health restrictions, Mouskondis said the program will continue to operate. It recently brought on three new restaurant partners — Stoneground Kitchen, Squatters Pub and Beer, and Culinary Crafts catering.

It also is seeking donations on its website, nicholasandco.com, to help offset the cost of the food.

Nicholas and Co. is among the region’s largest independent and privately owned food distributors, with operations in seven Western states and customers ranging from small sandwich shops to large institutional food-service providers. Six years ago, the company opened a new distribution center in North Las Vegas, in addition to its extensive facilities along the Wasatch Front.

However, like most food businesses, the coronavirus shutdown has put it on shaky ground. Mouskondis said the company, founded by Greek immigrants, was forced to cut salaries and lay off or furlough employees for the first time in its 81-year history.

The company won’t get a big bailout from the federal government and most diners are unaware of the role distributors play in the restaurant industry, she said. “We’re the forgotten part of the supply chain.”

Still, Nicholas and Co. continues to help, Mouskondis said, “because that’s who we are.”